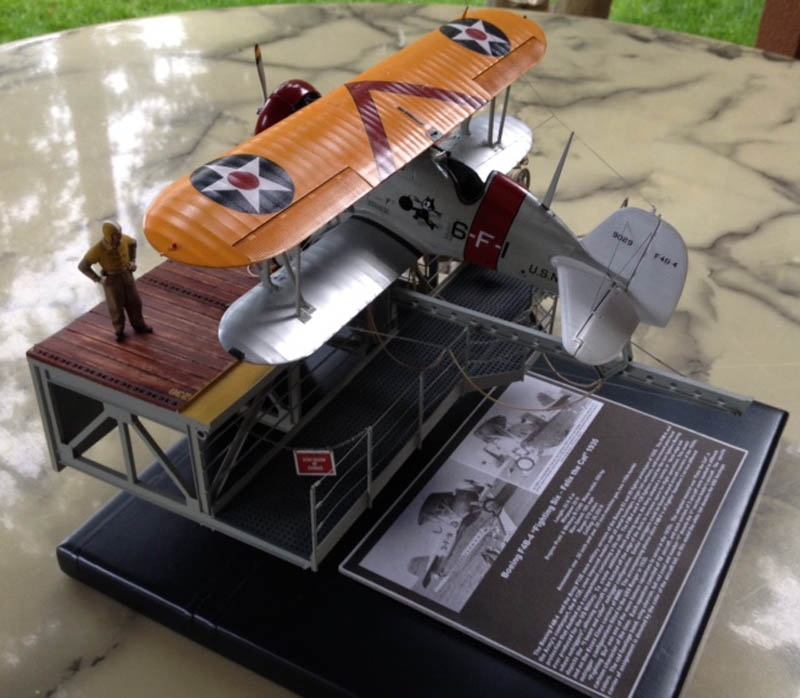 The kit is the old 1/32 Hasegawa F4B-4 with lots of modification including a completely scratchbuilt cockpit interior, windscreen, tailwheel, and with an engine donated from an old Williams Brothers engine kit (they used to sell their engines separately). The area behind the engine was faired in using sheet styrene cut and bent to shape to account for each cylinder. The engine front is salvaged from the kit, but the original cylinders attached were removed and the engine cover ground down and hollowed out from the inside to fit over the Williams Brothers engine. The horizontal stabilizer flying surfaces were cut out, new hinges were made, and it was repositioned in a downward position, as most photos I've seen show the flying surfaces drooping. The rudder was also removed and replaced, and the tail wheel was constructed from K&S brass and soldered. The tail wheel swivels, just like the real thing, so it can be positioned on the deck outrigger section as if it was pushed back into place. The section of Flight deck and the outrigger rail was entirely scratchbuilt as were the details. Plans don't exist for this, but I got the idea from a British modeling club website in which a modeler from the U.K. built a similar outrigger for his Hasegawa Curtis FB11C. Here are some additional build details: 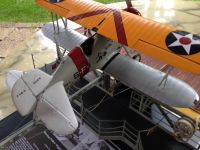 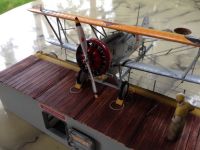 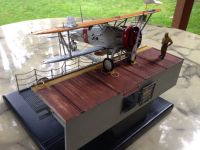 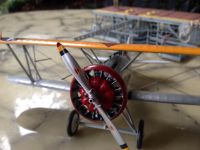 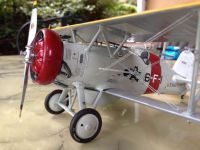 This was a fun build that took me about 4 months to complete, working at least 10-15 hours a week. It represents an F4B-4 positioned on an experimental outrigger aboard the USS Saratoga during the late 1930s. The Saratoga and several other aircraft carriers were selected to try out different types of deck outriggers for the Navy in the interwar era. These outriggers were used to save precious space while parking aircraft above deck while retaining the use of the flight deck for take off and landing. These types of outriggers would be retained for expedient use on carriers during WWII. My model represents the Flight Leader's F4B-4 from "Fighting Six" the "Felix the Cat Squadron" visiting the USS Saratoga in 1935, as depicted by the fully painted red cowl, numeral "1", and white tail on the aircraft. The Flight Deck Officer has just directed the positioning of the aircraft overhanging the side of the ship, and is standing back, smiling at the "Felix the Cat" cartoon character on the side of aircraft. I grew up watching these cartoons in the 1950s, so this particular scheme was attractive to me. I love these big 1/32 "Yellow Wings" aircraft of the 1920s and 30's, and have the entire line of Hasegawa "Yellow Wings" kits, an Ancient 1960 edition of a Monogram F3F (and an Al Williams Gulfhawk), a Williams Brothers Sparrow Hawk, and a Silver Wings P6E waiting in my stash - now I just need to find some time to build 'em.