IAI Dagger/Nesher from the Revell 1/32 Mirage 5 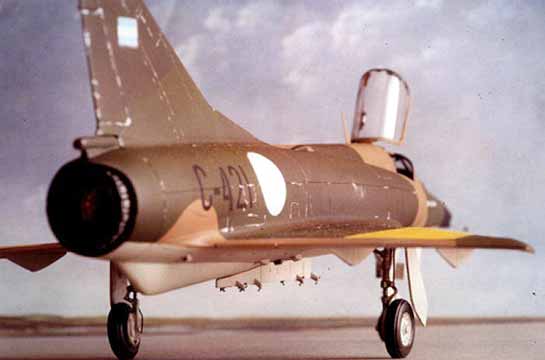 The Mirage 5 was the result of the specifications set by the Israeli Air Force to Marcel Dassault. The Israelis preferred to have less all-weather capability and more weaponry & range. As a result from the Six Days War on June 1967, France embargoed the shipment of the Mirage 5J to Israel. Then IAI started the development of an indigenous intercept/close support plane. As an interim measure an exact copy of the Mirage 5 was built, including the Atar 9C engine, with the designation Nesher (eagle). The blueprints were covertly acquired. Even a Swiss engineer, A. Frauenknecht, spent 4 years in prison charged of industrial espionage. The prototype flew for the first time on September 1969 and 60 planes were built. Later on 26 planes were exported to Argentina under the designation Dagger. Daggers, with A4 & Mirage III were the main AAF air-combat element during the Falklands War in 1982. More than half the Daggers were lost in combat by Sea Harriers, Sea Darts and Rapier missiles.

Just a bit of history, but about the model...

I got this kit, a 1/32 Revell Mirage 5, as a prize in a modelling contest. I really had no idea of what to do with it. I started building it but I wasn't much interested on that plane, nor on that kit. And then the Falklands conflict blow-up as well as pictures of Argentine planes, and among them, the Dagger. Later on, I received by mail the latest issue of Scale Models magazine (Feb. 84), and oh...surprise... a special feature on Argentine Daggers with pics, camouflages, FS numbers, etc...

Then the idea of finishing the job grow-up, and the search started. I found a feature on how to convert a Mirage to a Kfir (a bit long in the tooth, Scale Models Oct 77, but good nevertheless). I also found info about the Mirage 5 and Dagger/Nesher/Kfir history and careers. And, above all, detailed pics. As I've already mentioned the Dagger is an exact copy of the Mirage 5, so the conversion work was minimal.

And, with this new luggage I restarted working on that kit that I got as a gift back in 1980.

First of all let's make it clear. This model, and the kit also, is quite old . I finished it in 1987 (wow...time really flies...). When I built it I gathered the best info I could find. But now, I'm sure that there's a lot more info. May be you'll find some inaccuracies, specially referring to colors. AAF colors are not the best documented (at least in Spain). So if anyone out there has more info, please e-mail me, it'll help. That model was painted with Humbrol, Mo-Lak, Pactra and Microscale enamels. But in this feature I've tried to update the old Humbrol references to the new ones and instead of Micro varnish (lacquer) I've used Tamiya acrylic.

The kit is quite good, specially for its age. For about three years Congost (a Spanish Toy-maker) re-issued Revell kits in Spain under the banner Congost-Revell. Its quality ranged from good to dog. They were cheap, though. The kit contains 144 ivory colored plastic parts (quite soft) and 5 clear parts. A big, and rather bad, decal sheet with 2 decorations, French and Israeli, and 3 weapons choice completes this kit. Assembly is not quite good leaving large gaps, specially around the nose and the wing (lower parts). The kit also comes with the usual gimmicks of that time: rolling wheels, removable engine and opening canopy. 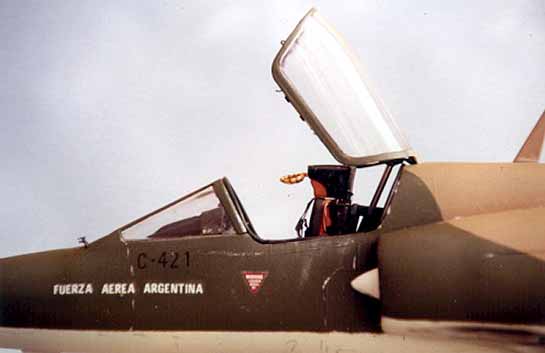 The internals, cockpit and wheel wells, are very basic.. I've got a Spanish magazine, sadly defunct, named Alabe that was really great. In issue 6 there's a feature on Spanish Mirages, lots of black & white pics of Mirages III that are equally useful. Thanks god we've got a brand new Spanish Magazine, Fuerzas Aéreas. They've published a special issue about Manises Air Base, home of Spanish Mirages III & F1, but almost all the info is helpful. We can find detailed color pics of cockpit, wheel wells, instrument panels, antennaes, painting details, mission profiles, etc ... a true gem.

I painted cockpit with a mix of 1 part Humbrol 67 (Panzer Grey) + 4parts 33 (Black). The bang seat was detailed with electric and telephone wire. Consoles cry out for detailing (you must add, at least, throttle, radio panels, oxygen tube and breaker circuits). The instrument panel is a decent decal but it can be improved with knobs, switches and the gunsight. Details in white, light gray, yellow and red. I added 2 rear-view mirrors (PE or made from plastic card) hooks and some piping and wiring to the canopy. The back of the seat is really empty and must be filled with boxes, pipes, wires and the canopy elevation mechanism. I also added the pressurisation seal in the cockpit sill with 1mm O-Ring. Polish the canopy and you're over with the cockpit. Here you can see more cockpit pics, this time from a Kfir and a Mirage III that would also be useful. I must confess that cockpit detailing is my favorite part of modelling.

The fuselage halves joint needs putty. You'll also find several ejection pin marks, but are easy to remove as the plastic is quite soft. The piece that forms the fuselage end, that also holds the engine in place, fits quite well, so you can leave the engine in place without gluing. Then we'll be able to pull the engine out. The engine itself is ugly, just 5 loose fitting pieces. If you want to show it, you'll have to do a lot of work. I mean an awful lot ... Not then, nor now am I in the mood for that. What's mandatory is to detail the nozzle. Plastic strip and stretched sprue will do the job. Paint with Humbrol Metalcote Polished Steel, Gun Metal, Mat Aluminium and Satin Bronze.

Prior to joining the wing halves we can detail the main wheel wells. The kit is rather poor on that, it's just a plain box. We're lucky since the Mirages usually have the main doors closed. They open just on gear extension and retraction. And the same goes for the front one. Of course this eases our work. With just a bit of wiring, some piping and the occasional box is just enough. Wells are painted in Humbrol white 34 as well as the undercarriage legs and the jet intakes. The pieces that form the main legs are acceptable although you'll have to file some flash. It's almost impossible to achieve a decent finish on the oleo. I changed it for a short length of chromed 1.5 mm pin and added brake lines. The nose leg is much worst. Halves don't match, so we'll have to file imperfections and change the oleo for a chromed 1mm pin. I added 2 landing lights (in front of leg). I flattened the bottom of all wheels to simulate the aircraft weight. Instead of painting tires plain black I prefer a mix of panzer gray and satin black.

The wing to fuselage joint is fair on topsides but horrible on undersides. So...patience, elbow grease and lots of putty and wet & dry...

Instead of painting the clear plastic position lights I prefer to make my own, green on right and red on left. I use clear tinted plastic taken from tooth brush handles. I cut a piece to a as close a form as possible, drill a hole on the back to represent the bulb and glue it to the wing. Then file it to a closer form of the wing profile. Go on filling with finer grades of wet & dry used wet (with soapy water), ending with 1500 or 2000 grade. With a rag and tooth paste we can polish to get them clear again. The result is worth the extra work.

Mods are few: adding a dorsal blade antenna, another blade antenna goes under the nose, and the nose support & probe. This probe support was made with epoxy putty (Tamiya Milliput or similar). Once filed to the appropriate shape, drill a hole for the probe. The probe itself is an hypodermic needle and the shape at its end is also made from epoxy putty.

With all that filing and filling done let's go to the paint-shop...

A light gray coat is very useful to spot blemishes. If all went well we can go on, if not we must start it over again until we get a better surface finnish. Now it's time for rescribing the lost panel lines. After that we'll have to clean the model with soapy water, rinse and leave it dry for at least three days. As the underside color is light grey FS 36622 (Humbrol 28), I used it for the base coat. And now...more paint coats.

All painting was done with an airbrush. First of all, I masked two bands under the wings and sprayed it Humbrol yellow 99. After that I painted two bands un upper wings and both sides of empenage top, also in yellow roughly broader than necessary. I covered the yellow with lengths of masking tape cut to the appropriate size. Then went the topside camo colors. As it was one of my first airbrushed models I didn't dare to paint the camo freehand. Instead, I used masking tape.

The colors are as follows : Tan FS 30219 (Humbrol 118), Dark Green FS 34102 (Humbrol 117), Olive Green FS 34079 (Humbrol 116) and this is the pattern. Drop tanks were airbrushed with the same colors as the fuselage, and nose-cone was painted satin black Humbrol 85. Mixes used for airbrushing Humbrol paint : 2 paint, 1 Humbrol thinner, 1 Nitro-cellulose thinner. On top of that goes a coat of Tamiya Clear Gloss X-22. This coat is very useful as it helps to set the decals and prevents decal-film showing thru. I use acrylic varnish instead of enamel as it doesn't yellow with age and it's really tough and glossy. Kit decals are awful, don't stick well. I had to use diluted PVA glue to help adhesion on the few kit decals that I was forced to use.The rest came from the Microscale sheet 72-352. Codes are Lettraset dry transfers on clear decal film. Once all decals were in place and dry, I cleaned the model with a damp lint-free cloth. Let it dry and now another varnish coat, satin this time, to seal it over.

To finish it up, the last details. I put an empty centerline bomb rack (because of my laziness I wasn't in the mood for rebuilding lot of bombs) and added bomb braces. I also added a blade antenna on topside just after the cockpit, and another one under the nose, just in front of the wheel well. I also added two oblong antennas at both sides of the top vertical surface. All antennas were made from 0.2 mm plasticard. I added two AOA sensors and two pitot probes at both sides of the nose made from plastic strip and stretched sprue.

And with everything in place, a bit of weathering...

For the chipping I used Metalcote Mat Aluminium with a 0 brush at panels junctions. Also with Mat Alu, I dry-brushed the cockpit sill and other areas prone to paint chipping (leading edge, walk-ways, etc...). And also put some washes following the air-flow. For the washes I used the white-spirit left in the brush-cleaning pot. I let it dry in the model surface for about 5 minutes and wipe it over with a soft rag. The wash was particularly heavy on the undercarriage and wheel wells.

Now we can say that the model in finished.

This represents the C-421 from the Grupo de Caza (Fighter Group) 6º, VI Brigada Aérea (Air Brigade) based at Tandil, Buenos Aires, Argentina. I found pictures of that plane before (May 82) and after the War. As I've already mentioned there are several mistakes in the reproduction : code letters should be in two camo colors, there should be a badge on the vertical surface, the flag is too small... Well, I'm open to suggestions for improvement.