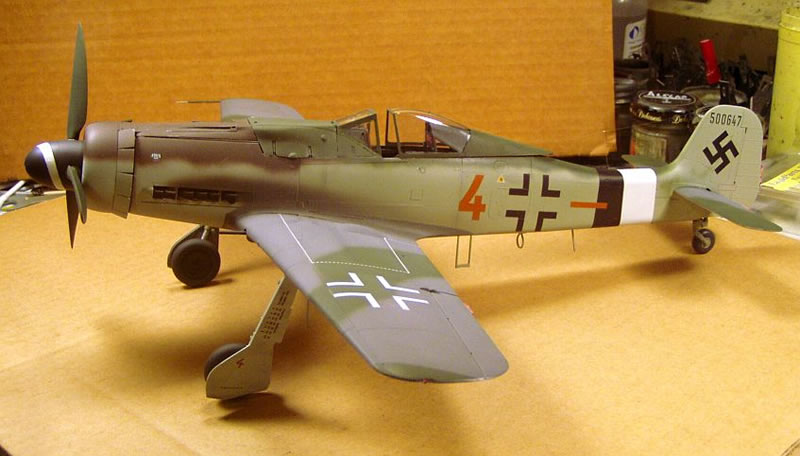 This was a real enjoyable build as most Hasegawa kits are nowadays. Most everything went together well with just a few problems with the Eagle Editions cowling (as noted in the Work-in-Progress thread). I replaced the kit guns with some from Quickboost. It doesn't show up as well as I'd like in these photos but the light color on the nose section, flaps, ailerons and the underside of the horizontal tail sections is RLM76. The fuselage from the nose back to the tail (top and underside) is RLM84 which is a provisional color which is kind of a greyish Sky Type S which was seen on a lot of very late war a/c. This color isn't available on the market (as far as I know) so I mixed my own using Model Master Sky S and RLM02 and my Mk.1 eyeballs. Paints used were Alclad Dark Aluminum, Xtracolor RLM75, RLM76 and RLM82 (which is really RLM83). RLM83 is a darker green than RLM82. Some paint charts show 82 as the darker shade but going by numerous color photos, I feel they have them reversed. Maybe, maybe not. White Ensign RLM81, Model Master RLM02 & RLM66. Decals are a mixture of kit decals (which really went on well), Eaglecals and Hasegawa decals. I did the spinner spiral using a Eduard mask for this kit. The cockpit is by Eagle Editions. 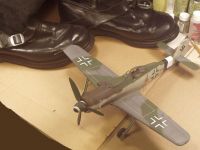 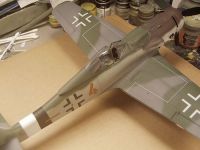 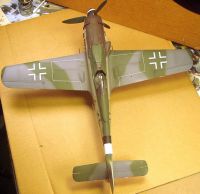 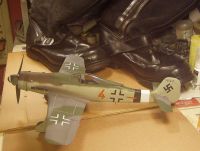